Getting ready for the Newbridge Arts Trail

Its still a couple of months till the Newbridge Arts Trail in Bath rolls round again but the time always flies. This year I am hoping to be more prepared, but this cold snap of weather is making me reluctant to venture out to my studio, so I thought I would update my blog.


These are the pieces I have ready so far, which include some new ones and a couple of favourites from previous years. I am also hoping to have a few larger bespoke one-off pieces for sale.

Trial and error has taught me to try to make small pieces and if I make something I really like I have started to make small batches of limited edition reproductions that I will have on sale at the Arts trail.
All these are also for sale on  my website here
Posted by Unknown at 04:31 No comments:


This is the picture of the completed stone carving of the palm tree relief in-situ in Portugal. The design process for this piece took almost as long as the carving itself. The client said palm tree, I thought, Beach! No, she was near a lake, oh and there were terrapins, and egrets and moorhens and kingfishers and dragonflies. I was worried that carving a palm tree in relief would be an impossible task, but I love a challenge and I think it turned out alright in the end. 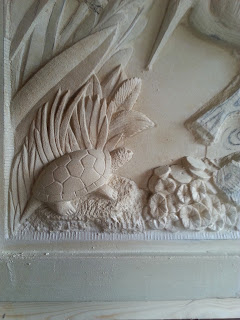 The first panel took two week and I though uh oh this is going to take a lot longer than I thought, but I did speed up, not much but a little. The most difficult thing was getting everything to line up and near the end I took the entire background back on each stone, but it had to be right.
The second panel was harder. It had to meet up with the carving of three neighboring panels which hadn't been carved yet so I had to leave so much of it un-worked until those were in progress. 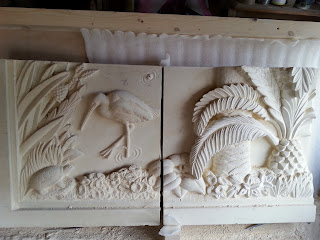 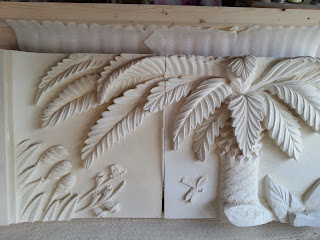 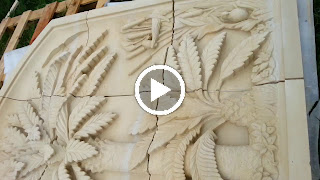 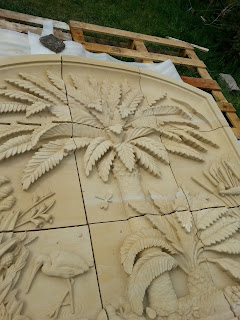